The grandiose cathedral of St. Triphun (St. Triphon), from 12th Century, was built on the foundations of an old church dating from the beginning of the 9th Century, During its long history, the cathedral church was ruined, reconstructed, and rebuilt many times.

It has magnificent facade decorated by two Renaissance belfries, erected at the place where the former belfries, created in the Romanesque style and destroyed in the 1667 earthquake stood. Above the main altar, Romanesque and Gothic motifs from 1362, are combined from a stone ciborium.

The treasury, finished 1657 and luxurious with its Baroque ornaments was made by the famous Venetian sculptor Francesco Cabianca.
An item of huge artistic value is a golden bowl with ornaments where the head of St. Triphon is kept. A masterpiece of Renaissance Art is the silver Crucifixion from the 15th Century. A small sarcophagus of Greek marble in which, according to a legend, merchants brought the body of St. Triphon from Constantinople to Kotor in the year 809 is also kept in the treasury. 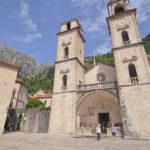